Each song in our Amazing Queer Songbook aligns with a chapter about what inspired us – in our personal lives and in the world around us – to write the tune.

Excerpts from CHAPTER 1 / LET ME LOVE YOU NOW:

I was dancing with Group Motion Multi Media Dance Theater and returning from a performance gig in Berlin to teach a workshop at Antioch College in Ohio. Group Motion built beautiful pieces based in improvisation. Using original music film movement text … I was there as a company dancer … Dan was there to play his flute.

At the time I was in a relationship with a dancer/filmmaker from Group Motion. Before that I had been in an intimate relationship with a man and a woman. Yep … a real live 3some … 2 men 1 woman. I was working through my sexual awakening and desire for both the female and male body mind and spirit. It was truly hands on and the experience was divine. Then I met Dan. 43 years later Dan is my man. I guess I can call myself a relationship man.

I thought I was in love with Dan’s legs. His eyes and knees. His sensitive nature. His mysterious ways. He was quiet I was not. His family was small. Mine was not. He grew up living the suburban life I did not. We were an awkward pair but I knew I wanted him as my partner in life. Not sure why. I just did. So I pursued him as gently as possible which was difficult for me because I’m one to go for what I want. I was patient with Dan. I was learning to be patient. I was learning. I am learning 43 years … ever onward.

We met in Ohio in late summer 1975. Michael was a dancer with Group Motion – a modern dance company that attracted lots of art students to classes they taught at Philadelphia College of Art. Michael was one of those students, worked his way up to be a company dancer, and had just returned from performances in Europe to a summer intensive the company was teaching at Antioch College in Yellow Springs Ohio.

I had stumbled upon Group Motion’s classes and Friday night workshops. I fell in love with the improvisational energy – the contact and expressiveness of physical movement. And I was looking for a new life! I’d moved into the city a few months earlier and was living in West Philly in a basement apartment and doing maintenance work for a college friend of my brother’s – a landlord/developer who called me “Trash” because in addition to painting apartments I took out the trash. Ha ha. You could see why I wanted to move on from that life.

I first remember seeing Michael in a bright dance studio – I was playing flute (the company championed live music improv as well as movement improv). Michael was stretching at the bar – long and lean and young and dark. I’d never seen anyone quite like him! I was a bit cautious and protective – my usual way of being. He liked me and
I’m grateful beyond words that he took the initiative to court me. I don’t think we had sex right away – might have waited two months or so which was an eternity in mid 1970s gay life! I had been meeting a lot of guys, coming out in Center City Philly, and was quickly tiring of one-night stands. I remember thinking – I really want to find a steady guy, a friend. My previous long term relationship – with my high school sweetheart Beth – had ended about a year before. Journal entry from October 19th 1975: “I have spent much time this week with Michael Biello. He has been very kind to me.”

Excerpts from CHAPTER 2 / YOU DO NOT KNOW ME: 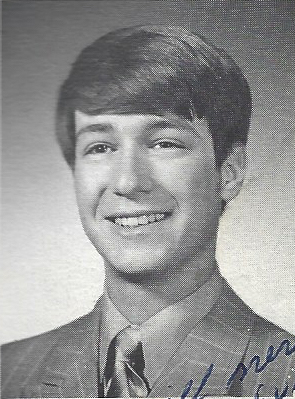 I was born into a closeted world. A liberal Jewish suburban world, but still closeted. This was the 1950’s. Before the internet. Before Modern Family or Will and Grace. Before Sam Smith or Ru Paul or even The Village People. Before Stonewall or Woodstock.

I had crushes on my friends, both girls and boys, but I had no context at that time to understand or process the boy/boy or even the bi/bi feelings. Suspicions of my own homosexuality scared me and drove me into secrecy – seeking out information in the dark stacks of the psychology section of the library. The information I found wasn’t positive.

While getting fitted for a rented tux for my junior prom the man measuring my trousers lingered a bit too long in the crotch area. It didn’t turn me on, I felt afraid. How could I balance the sweet feelings of affection I felt for some of my friends with this behavior? A schoolmate and I had an awkward sex session that led to avoided eye contact at school and a gradual termination of our friendship.

As America moved toward the late 60’s sexual liberation began to show up in magazine photos and articles that arrived weekly at our house. I was fifteen when I first saw two “actual” gay men being affectionate. It was the summer of 1968 – we had flown to San Francisco for a family vacation. Dad rented a convertible and we drove down Haight Street to the famous corner of Ashbury and the center of hippie counter-culture. Apparently other gawkers from around the world were doing the same thing, because we got into a huge traffic jam and slowed to a halt. Suddenly, two young lovely men holding hands walked across the street right in front of our car and for a moment everything else disappeared from my vision. Nothing spoken. Just the possibility of a future life … filed away into my heart and mind.

Fast forward to 1974. I had embraced my gay self while at Dickinson College, and was now living back in Philadelphia. City Council was holding hearings to decide whether or not to grant equality protections to gays and lesbians, and I attended. The hearings were hostile and the bill was defeated. My picture was snapped at City Hall and I got nervous it would get published in the Philadelphia Inquirer and that my parents would see it. So I resolved to go up to the burbs and come out to them that weekend.

Mom and Dad were in the den, Dad sitting in his usual place, tilted back slightly in a brown recliner that angled toward the center of the room. Mom often sat in a matching recliner on the other side of the room but today she was curled up on the orange couch close to Dad. “Can I talk to you guys?” I spoke softly but they must have heard urgency in my voice. “Sure. What’s going on?” asked Dad. I sat on the floor facing them, the white brick fireplace wall just behind.

I stalled, staring at one of the bricks on the edge of the hearth that was beginning to turn grey. “I need to tell you something important. I don’t want you to hear about it somewhere else.” “OK,” said Mom, inhaling tightly as she untucked her legs and sat up straight. My beating heart climbed up into my throat. “I’m gay.” They were quiet. My eyes shifted back to that lone grey brick in a sea of white.

Dad was more curious than upset, although as time went on an increasingly icy distance crept in between us. Mom was less positive, which pained me because the two of us were close. A few weeks later when Mom and I spoke about it again she told me she loved me and would accept and support my choices. But she asked me not to tell her mom, my grandmother Lillian. Maybe she didn’t want to deal with her mother’s judgment, as if she’d done something wrong in raising a gay son (actually two as it turned out). Whatever was going on with Mom, I agreed to her request, and this led to a slow erosion of my intimate relationship with my grandmother. For the next 10 years Grandmom was alive, I avoided or wiggled my way through any question from her that touched on relationships or my true nature. “What happened to your girlfriend Beth?” “How come you’re not still together?” “You mentioned you went dancing at the DCA. I heard that’s a gay club. Why did you go there?”

In 1984, when she was close to death, Michael and I were producing our first openly gay musical Xposed. Visiting her in the hospital she told me she’d read a review of the show. “Why is it about gay people?” I could have, should have, spoken the words. But I kept my promise to Mom and stayed silent. 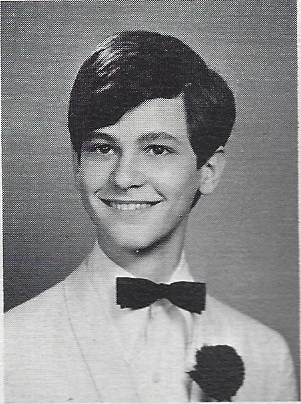 I never thought I was in the closet … until I met dan.

I was bullied
I didn’t understand what about me made other boys angry
was it my disinterest in sports?
my love of art?
what about me frightened them?
their bully business seemed to be more about them than me
I was just being me
I didn’t know the closet
I had nothing to hide
or did I?

you need to speak it
tell your family
tell the world

did my family know I was in a special relationship?
did they know dan was my lover?
my life partner?
no mister & mister family invitations
no shared family holidays
he with his
me with mine
dan was out to his family
and still I felt careful around them with our affection for one another
was this the closet?

did I need to speak the words?

simple answer … yes
enter activist michael
I did it
I spoke it
I shared it
flaunted it
became aware of how deep in the closet I was
how dark the light
how ridiculous the hiding
how much my life was waiting for me to live . love . out . loud

1985
dan and I had our new musical Xposed premiering at the walnut street theatre
this meant reviews
time to tell mom before she reads some stranger’s news about her son
I spoke the words
actually wrote the words in a letter
mom was not happy
not that I was gay . that I never told her
dad had passed a few years before . I think he would have been fine (?)
after a week or so of total silence
things opened up
mom began standing up for her son
sending me newspaper and magazine articles on gay issues
she became my voice in her church defending the rights of lgbt people

for us queer folk it’s not easy
we think before we touch . hold hands . kiss
never know whose fist is ready to strike
I’ve felt that fist to my face
it’s a risk
to come out
to speak your truth
in the end it’s worth it